Ming and Barbara Louie enchanted the club as our featured performers for May.

Our June meeting is coming up next week on June 8th and will be held once again at Kerby's Koney Island in Livonia.  We had a great meeting there last month and our Treasurer Rob Krozal has secured another invitation for us this month.  Thanks Rob. Kerby's Koney Island is located in the Newburgh Plaza on the Southeast corner of Six Mile and Newburgh roads in Livonia.

Our theme this month is "Water" or "Liquid" magic so dig into your magic trunks and cases to see what tricks you have to match the theme.  Or as always bring whatever you have to demonstrate or perform.

We have some exciting announcements that will be shared at the meeting about the future of our club.  We are stepping it up and taking it to the next level so please come out and join us.

I hope to see you all Wednesday at Kerby's Koney Island 37155 Six Mile Road in the Newburgh Plaza.  That's on the Southeast corner of Six Mile and Newburgh roads in Livonia.  We'll meet from 7-9 pm as usual but please come early at 6 pm if you'd like to join us for dinner. 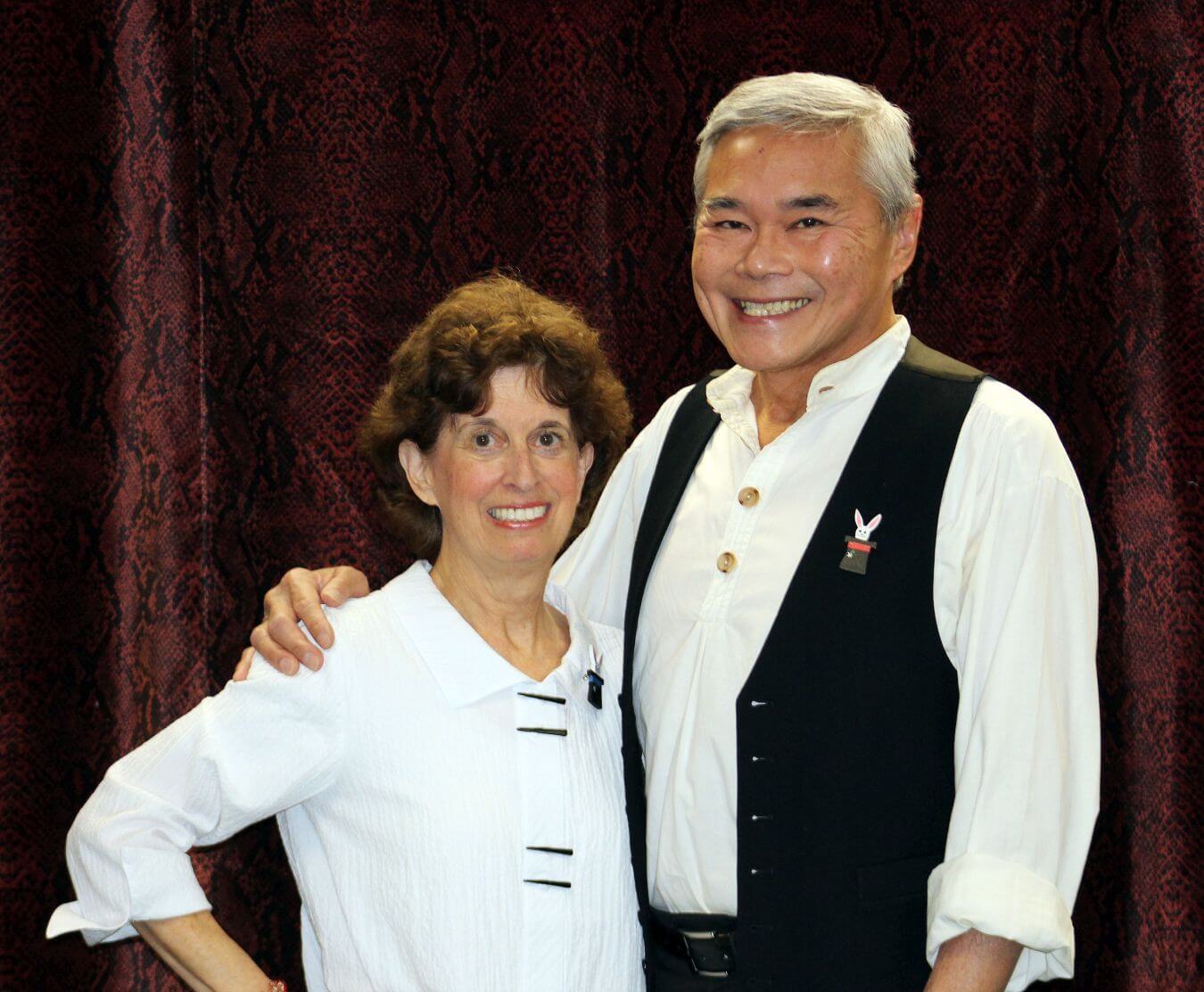 As a reoccurring feature of the Magic Messenger we will highlight a member and ask them to answer a few questions about themselves. This month the "Spotlight" is on our featured performer for June, Ming and Barbara Louie.

Where did you grow up / where have you lived?

I was born in Shenzhen China, and grew up in California, Barbara was born and raised in Detroit.  Since our marriage we've lived in Hawaii and Rhode Island.  We now live in Northville.

How did you get started in magic?

I started in magic by being fooled with the French Drop performed by my grandfather.  I was even more amazed when he revealed the method because it was so simple yet fooled me deeply, I wanted to know why.

What type of magic do you perform?

Barbara and I perform slightly larger magic suitable for a crowd.  With Barbara assisting we have a bit more flexibility in our choice of material.  I am fortunate that she has a passion for performing and the romance of the road.  Plus she is the perfect size for every illusion.

What is your favorite magic book?

My favorite magic book is "Magic and Showmanship, a Handbook for Conjurers," by Henning Nelms.  Nelms was an avid magic fan and a drama teacher at McGill University in Montreal, Quebec.

Who is your favorite Magician of all time?

My favorite magician is Jimmy Martin who called himself the Great Martini.  In later years he and his wife owned and operated the Broadway Magic Shop at the corner of Broadway and John R. in downtown Detroit.  It was the former Hall Magic Company.  Doris Hall the widow, sold it to Jimmy in 1955.  Every Saturday, from the age of 12 onward, I was in the magic shop talking with Jimmy and his wife, they always worked together.  Lovely kind people.

Do you have any words of wisdom for newer magicians?

The best advice for newbies would be to join a magic club.  The second best advice would be to become a roady for a touring magician.  Learn the craft in the trenches, see what works and what doesn't.

Barbara adds...
Ming pretty much summed up my feelings about being part of his magic act.  I really enjoy doing it, and still love jumping out of boxes!  One book I found to be particularly helpful was one we got at an IBM convention many years ago.  It is called "The Magician's Assistant" by Jan Jones, and we always had our assistants read it, which they also found useful.  As far as we know, it's the only book of its kind, geared specifically for the assistant.

Learn more about Ming and Barbara at mingthemagician.com.

We had a good turnout at a new meeting venue this month. Kerby's Koney Island.

Ming and Barbara Louie kicked us off with a great set. Ming opened with a routine reminiscing about his Grandfather performing magic for him as a child. Ming produced a number of coins from a silk, vanished them only for them to reappear audibly and visibly in a wine glass. Next Ming performed a three-ring linking ring routine. Then Rob Krozel and Sean Neas were brought up to assist with the Cloth and Rope of Death. A comedy rope escape routine. Finally Ming performed a great floating table illusion concluding with a liberal distribution of fairy dust amongst the audience to solicit good behavior and kindness.

Self introductions were conducted where we learned a disproportionate number of members attended Schoolcraft College.

Then the raffle was held and Dan Jones was the proud winner of beautiful print of Bancroft. This colorful print was expertly framed and generously donated by Kevin Peshik.

John Russell – We’re all the same on the inside

Ron Hoole – All you need is love

Welcome to my inaugural column of Our Rich Magical Heritage. My goal is to monthly introduce you to some of the greatest and maybe a few not so well known magicians from the past. It has become a bit cliche to state that "we stand on the shoulders of giants," but that doesn't make it any less accurate. I hope to introduce you to a few of them in the months to come.

Like many of you, I was introduced to magic at a young age. My father, who was into magic as a teenager, sat down with his number four son (me) and introduced me to magic. I fondly remember many times that we watched the movie "Houdini" together. That is the one with Tony Curtis and Janet Leigh, back when you had to watch the TV Guide to know when the movie would be shown. My father had seen Blackstone, Sr. at the Masonic Temple Theatre in Saginaw, and together we developed a keen sense of nostalgia for the "Golden Age of Magic." (In the modern era, The Golden Age of Magic is considered to have been from the mid-1800s until the early 1900s,)

Jumping forward to graduate school, I specialized in American theater history and the popular entertainments of the 19th and early 20th centuries. After completing my thesis, I wrote additional papers on theater history that I presented to conferences, so writing about this time period is in my blood. I look forward to sharing this enthusiasm in the months to come. Now, on to this month's story.

One lucky attendee of June's meeting will win this poster of the American Magician William Ellsworth Robinson (1861 – 1918), who performed in the character of an Asian Magician under the stage name Chung Ling Soo. Over the next three months, I will write about Robinson; however, this month, I want to focus on the phenomenon of magicians from Europe and the United States choosing to perform as Chinese Magicians. During the late 1800s and early 1900s, artists and designers would draw inspiration from North Africa, the Middle East, and Asia in a movement called Orientalism. As part of Orientalism's broader cultural movement that gripped the West, magicians chose to perform as Chinese Magicians. This usually included dressing in ornate robes, using yellow facepaint, and speaking Chinese Pidgin English. While Orientalism made for some fascinating art and, as we shall see, magic, at Orientalism's core was a negative stereotype of these races as primitive and static.

The Mosaic Soo, is from a stone lithograph poster printed by J. Weiner of London around 1916. One lucky attendee at our June meeting will win a framed reproduction of this art work.

For magicians, Orientalism provided a shroud of mystery to throw over the rise of science and loss of mystery in the West. “For some, the idea of oriental magic became a kind of flourish, like pixie dust, that could be cast over audiences in London, Paris, and New York to help audiences find that precious feeling of enchantment. (Conjuring Asia: Magic, Orientalism, and the Making of the Modern World. Groto-Jones, Cambridge University Press, 2016.)

Before becoming Chung Ling Soo, Robinson was billed first as “Robinson, the Man of Mystery” and then  “Achmed Ben Ali" when he started to perform a black art illusion show in the style of the European magician “Ben Ali Bey." When he first started his performance as a faux Chinese magician, he went under the stage name "Hop Sing Soo" and invented an elaborate backstory to support his character. A booker suggested Robinson change his stage name to Chung Ling Soo.

Some professional magicians knew that Soo was Robinson, but the general public was shocked to learn this upon Robinson's untimely death. Robinson created this illusion by never going out in public unless dressed in character and never speaking English in public. He always took a translator with him to meet with the press, solidifying the illusion that he was, in fact, Chung Ling Soo. In the end, Robinson would speak one last line of English on stage, but that is a story for another time.

Next month, I will look at some of Robinson's famous illusions. Until then, remember the rich magical heritage that we have inherited.

"The Riddle of Chung Ling Soo - Chinese Conjuror" by Will Dexter.

Several of us travel to see Marvin Mathena perform at his retirement home in Canton.  Bill Rabe, Kevin Peshik and Karl Rabe made the trip.

Marvin’s set included a number of silk and streamer productions, a ball and vase, a nice Gozinto box routine with the boxes decorated as dice, an egg bag routine, What’s Next?, an interesting reversing arrow routine and a comedy Multiplying Bottles routine alá Abbott and Costello with a staff member trained as an assistant. Well done Marvin!

Marvin mentioned after the show that the Butterfly Silk pictured below has traveled around the world!

From the Archives will periodically take a look back at photos, documents and other memorabilia from the clubs archives.

Today we take a look at the club's S.A.M. Assembly certificate under the name Michigan Assembly No. 88. Curiously, this doesn't seem to have a date.

If we take a close look at the signatures, at the top we can try and make out these signatures. If you have input, comments and correction to the list of signatures, please let me know.

Two magicians walk into a bakery

The first palms 3 donuts. He then snidely challenges the other magician to perform a trick of equal benefit. The second magician then calls the baker and asks for 3 donuts if he'd like to see a magic trick. The baker does his part and provides the donuts. The magician then eats the donuts and exclaims "Ta-Dah." The bakery is angered and asks "Well what's the magic trick?" The second magician replies "Look in my friend's pocket."

How many magicians does it take to pull a rabbit out of a hat?

One. It's a trick question.

Harry Houdini used to use lots of trap doors in his magic act.

He eventually stopped, he was just going through a stage.

The Ann Arbor Magic Club Board